>Gladstone Anniversary in the Snow 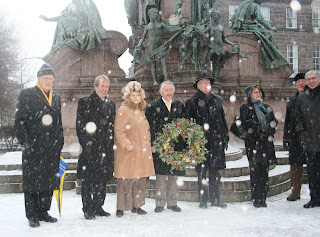 Yesterday, to celebrate the 200th anniversary of the birth of Liberal statesman William Ewart Gladstone a group of hardy Liberal Democrats gathered in the snow and ice to remember him. I was not among them. To my eternal shame, a septuagenarian from deep in the borders managed it, but I didn’t manage to get past the snow and ice on my street. Mind you, my neighbour fell over the other day and broke her wrist, which did nothing to make me like the wintry conditions any better. She can’t get an appointment at the fracture clinic until next Thursday, either, because so many other people have similar injuries.

The photo was kindly sent to me by John Barrett MP and shows, among others, Lord Steel and Robert Brown MSP.

After the terrible news yesterday of Akmal Shaikh’s execution, Kelvin makes a salient point linking Gladstone to events in China.

In looking for Gladstonian wisdome to share with you, I found some quotes from him which are particularly close to my heart:

“Thank God for tea! What would the world do without tea! How did it exist? I am glad I was not born before tea.”

How very appropriate that he shares his birthday with my lovely granny who just loved her tea, a trait I have inherited.

I hope those who gathered yesterday went and had a nice, warming cuppa after the ceremony.

A lot of what Gladstone was saying 150 years ago is relevant today. Take a look at this:

“Selfishness is the greatest curse of the human race” is particularly relevant as we remember, 30 years on, how the last Tory Government encouraged self advancement and discouraged community, with Thatcher herself eschewing the notion of society. Surely we’re not going to make that mistake again……

As Labour and Tory continue with their ridiculous, phony class war which comes as a welcome distraction from having to defend policy or record, Gladstone’s view is alive and well in today’s Liberal Democrats, standing up for ordinary people:

“All the world over, I will back the masses against the classes.”

And finally, can you get more idealistic and optimistic than this?

“We look forward to the time when the Power of Love will replace the Love of Power. Then will our world know the blessings of peace.”

Gladstone lived through an age of constant political reform, where the franchise was being slowly extended and stood for cleaning up politics, improving conditions for workers, making sure all children were able to go to school. In the 20th century, the welfare state and the NHS were founded on rock solid liberal principles. Today’s Liberal Democrats recognise that there is much still to be done. Education, reducing poverty and political reform which brings Government closer and more accountable to the people are at the heart of what are, have been and always will be about.