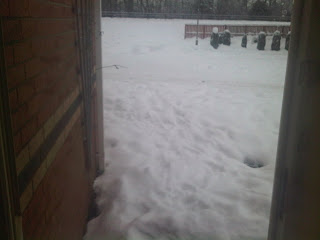 It’s Day 31 of the Big Freeze here. That’s over 4 weeks since the snow came. It’s certainly on its way out now. Only a few days ago, the rabbit run had well over a foot of snow on it, now only a couple of inches. We can even see some grass. Our little cul de sac, however, was still regularly scattered with cars in weird positions, their owners having bravely tried to make an escape. I have most sympathy with my friend who bought a sporty wee MX-5 just before the snow came. Sleek and sexy it may be, but more suited to speeding along the roads in the south of France, from Nice to St Tropez and then on to Monaco than for dealing with Winter in West Lothian. Even our little Micra hasn’t been anywhere since Bob got stuck on 30th December. The car that he helped to dig out on 2nd January has only just managed to move from where it was left then across the road from our drive.

Our street could not be any lower on the Council’s list of priorities and not once did I ever expect them to come and dig us out of our misery. Much to my surprise, I woke this morning to the sound of a digger shovelling the snow away. I have never been so pleased to see tarmac in my whole life so I have to say a big thank you to West Lothian Council. I wanted to go out and give the guy driving it a bottle of beer but couldn’t because a) we have no beer and b) the sight of me in my jammies might have traumatised him for life. There’s still snow on the path, but I’m hopeful that I might get out somewhere, anywhere different from this street for the first time since 19th December.

Don’t get me wrong, I love my home, messy and completely unlike a show house that it is, but I’ve been struggling a bit with cabin fever particularly in the last couple of weeks.

Look at the after photo! 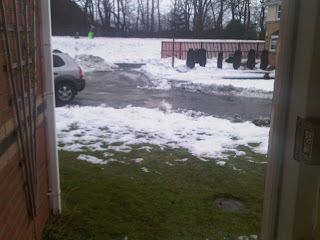