>Channel 4 let a bunch of Lib Dem parliamentarians take over their political slot recently. This is their effort, which I’ll let you watch before I nitpick.

I liked the broad brush stuff – it was the heart and values stuff rather than a list of achievements. I liked Farron making the point that if you liked Lib Dem ideas in the past, you never really got to see them put into practice, but we’re making a difference now. I also liked him saying that we didn’t bottle out of power when we had the chance.

There was a good mix of winning issues mentioned – pupil premium, raising of tax threshold, warmer homes, restoring earnings and pensions link and rebalancing the economy, but all woven together in terms of the values they showed.  Scottish Liberal Democrat spokespeople, watch and learn. We don’t need lists, we do need the Liberal Democrat heart and soul to be let out to speak for itself.

Mostly men, mostly in suits, all middle aged, filmed in offices or near Westminster. A bit of imagination, please!  Where are Lynne Featherstone and Ros Scott, or Jo Swinson and Jenny Willott when you need them? Were they even asked?

I’m getting obsessed about Chris Huhne’s hair at the moment. I know it’s not healthy (my obsession, not his hair). I just feel like he needs to get it cut and evened up a bit. It’s got so bad, that I even took this photo when he was on Question Time recently. 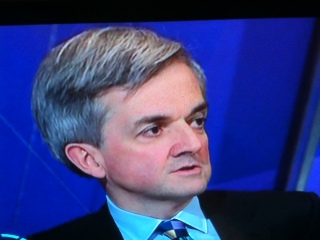 Update: It appears I am not alone in thinking that this was altogether too male. Jo Shaw tweeted me last night to say:

I agree with your point re the cast of the prog, and so do others-led by @DintiBatstone we’ve emailed Cowley Street about it.

I won’t be holding my breath, but lets’s hope that the penny starts to drop sometime soon. It does us no good to portray ourselves as a middle class, male party when it’s patently not the case.