I was up early on Saturday morning to join an Amnesty Scotland protest outside the Russian Consulate in Edinburgh. The event was to mark 500 days since the start of the uprisings in Syria which have seen so many  lives brutally taken. There as a mix of particpants, with the youngest at just 10 months, to symbolise the 24 lives needlessly lost every day. It goes without saying that little children like Zain here should be happily toddling around, not being indiscriminately murdered by a horrible regime. 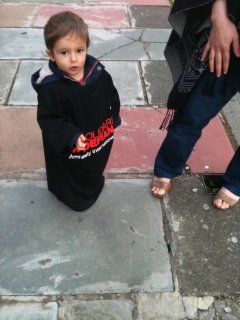 What do we want the Russians to do? Well, they could stop giving the Syrian Government arms for a start.Amnesty Scotland Director Shabnum Mustapha added that:

We are calling for an immediate arms embargo on all arms sales to the Syrian government, we are calling for the situation to be referred to the International Criminal Court to investigate war crimes, and we also want a freeze on the assets of the president and his associates.

What started as a protest for freedom and rights has ended in terrible bloodshed.

The event attracted a fair bit of media coverage, on the BBC , STV, the Scotsman and many local papers across Scotland.

Shabnum Mustapha herself had a long article in the Scotsman on Saturday in which she wrote:

We were disappointed that the extended UN supervision mandate in Syria did not include a stronger human rights component which would have improved monitoring and reporting of human rights violations on all sides. Amnesty has repeatedly called on the UN Security Council to refer the situation in Syria to the International Criminal Court, to freeze the assets of the Syrian president and his associates and to impose an immediate arms embargo to stop the transfer of arms to the government.

I’ve finally put my money where my mouth is and actually joined Amnesty. I’ve been meaning to do it for ages but never got round to it. Amnesty Scotland has done so much great work in the past year, on Guantanamo, Egypt, Syria and equal marriage.