Posted on November 1, 2010 by caronlindsay

>So, I was lying in bed at 7:30 yesterday morning, dosing away, like you do on a Sunday, when I was roused from my semi consciousness by my phone beeping at me.

The message was one of a stream of photos I received during the course of the day from Hugh O’Donnell, Liberal Democrat MSP for Central Scotland, who’s currently on an international delegation to Jordan and Israel. You can read his first report of his visit -which to me is pretty harrowing – here. 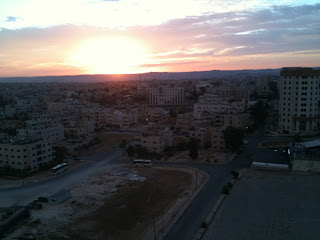 Says Hugh: So, here we are! No problems at Jordan and watched the sunrise over Amman before we set off for the border.


For the next few hours I waited patiently to see if the delegation would be allowed into Israel. Every so often he’d post an update to Facebook, each more pessimistic than the last. He was worried that his visit to Gaza 18 months ago would mean he was refused entry.


Here’s a picture of some of his fellow travellers, an interesting mix of delegates, led by 80 year old Sir Gerald Kaufman,13 in total,Swiss, Portuguese, Polish, Palestinian, English and one Scot

After a couple of tense hours at the Israeli border, the Delegation was allowed in and headed for Jerusalem  passing Jehrico in the West Bank, and through the Jerusalem desert – a de-millatarised zone with only a few Israeli settlements.

In Jerusalem itself, here’s Hugh on the Mount of Olives with Sir Gerald Kaufman

I’m really grateful to Hugh for sending me these photos. I’m hoping that there will be more to come as the visit progresses.