How very dare you, Joan McAlpine! 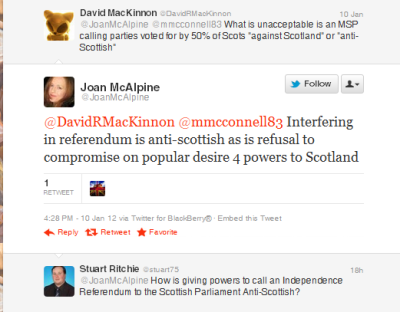 I make absolutely no apology for saying that the Liberals, the Labour Party and the Tories are anti-Scottish in coming together to defy the will of the Scottish people and the democratic mandate that they gave us to hold a referendum at a time of our choosing, which, as the First Minister said, would be the latter half of the parliamentary session. The sight of those parties cosying up on the sofas of various Scottish television studios will really alarm the people of Scotland.


I have to say I was livid when I first saw Joan McAlpine’s comments that those who don’t agree with all the details of the SNP’s plans for the independence referendum were “anti-Scottish.” To suggest that I want to act against the interests of the country I love, where I was born, which I yearned for so much it actually hurt during the 11 years I had to live away from it, simply because I don’t agree with SNP plans for the independence referendum is outrageous.


They say you should sleep on things before you say react. Well, I have, and I’m still livid, hurt and saddened at this poisonous attack on political opponents. I really can’t stand this sort of thing, no matter who it comes from.


I have defended the SNP on several occasions against jibes from Labour that they were not patriotic. It literally makes my flesh creep when this sort of stuff is used as a political weapon. Can we not just all accept that we all love and care for Scotland, whatever view we have?

Nobody doubts the SNP’s mandate to hold a referendum on independence, but if wanting that poll to be fair, clear and legal, expecting both my Governments to work together to achieve that,  makes me anti Scottish, then, really, what is the world coming to?

What’s more worrying is that senior figures in the SNP have tolerated this sort of language. Nicola Sturgeon defended her on Question Time last night and even the brightest of their new generation, Humza Yousaf, while saying that he wouldn’t have used that language himself, didn’t rebuke her anywhere near enough on Call Kaye this morning. That is more of a problem to me than the remarks themselves. Nicola referred on Question Time to those who talk Scotland down – that’s pretty much become code for anyone who disagrees with SNP policy. So much for them listening and being inclusive.

If the SNP allow this sort of language to go unchecked, as my friend Allan pointed out on Facebook yesterday, it could be the biggest impediment to them being successful in their referendum. I don’t quite agree with him on that because I think the evidence will prove the benefits of the Union but he has a point.

As the debate unfolds over the coming weeks, there will be a clear dividing line between patriots and nationalists.

This came from new Conservative leader, Ruth Davidson, in the same debate and has gone largely unnoticed in the media. To my mind, that’s just as bad. I don’t want to hear this kind of stuff from anybody.

How rubbish are we going to feel after 3 years if the debate has been full of bitterness and poison? I want to come out of this process uplifted by ideas expressed in a passionate and positive way. This kind of row suits the SNP, though,  – for yet another few news cycles they are not challenged on the mechanics of independence, its practical effect on our daily lives. Sadly, I have a horrible feeling the run up to the referendum will be permeated with such comments.

Joan McAlpine is turning herself into the Jan Moir of the SNP. She’s exhibited the same sort of narrow minded intolerance that Moir does with her ill informed rants. If she can’t sincerely apologise and withdraw her remarks, then she really should be sacked from her job as the First Minister’s Parliamentary Liaison Officer. I won’t be holding my breath for either of these things to happen, though.

Come the day after the referendum, we’re all going to have to get on and live together, whatever the result. There will be a winning side and a losing side. The divisions will need to be healed.  That process will be much easier if we avoid corrosive language, conduct the debate with civility and mutual respect,  acknowledging each others views, right to hold them and genuine love for Scotland. It’ll get passionate, angry and fiery at times, but there are limits to what’s acceptable and we should all make efforts not to cross the line.

28 Responses to How very dare you, Joan McAlpine!